5 Days on the Constitution

Join Author and Attorney David Cross, as we explore the creation of the Constitution by getting to know the four great figures who brought it about – George Washington, Thomas Jefferson, Alexander Hamilton, and James Madison. In this fascinating five-day tour we will get to know each of these unique individuals as we discuss their particular roles in bringing about the Constitution. 1. Thomas Jefferson was not in Philadelphia when the Constitutional Convention occurred, but his Declaration of Independence served as the clarion call to a new country. We will learn about his significant contributions to our current perspective of the Constitution, both from his debates on its meaning with Alexander Hamilton, and his actions as President of the United States. 2. George Washington knew better than any of the other Founders just how dangerous it could be to try to go forward without a significant central authority. Washington was indispensable in bringing about the creation and ratification of the Constitution, and became its most important interpreter as he sought, as the first President of the United States, to divine the true meaning and intent behind a vague and sometimes baffling document. 3. Alexander Hamilton saw it as his “odd destiny” to fight for the Ratification of the Constitution, despite his private view that it was a “frail and worthless document.” Despite his failure to convince anyone at the Constitutional Convention to support his ideal of a government based loosely on the British model, it was Hamilton, along with Madison, (and, to a far lessor degree, John Jay) who wrote the Federalist Papers which examined the meaning behind the Constitution to New York voters. It was also Hamilton who, as the nation’s first Secretary of Treasury, opposed Jefferson’s strict constructionist beliefs and convinced President Washington that there were powers within

Join Author and Attorney David Cross, as we explore the creation of 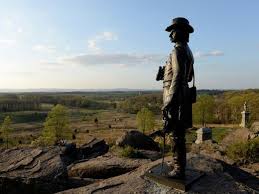 Join us as we explore the Civil War, and visit the most visited battlefield in America.  In many ways the story of the Civil War is the story of America, and this story is told here, in Gettysburg better than anywhere else.  See where over 50,000 Americans of both sides became casualties.  You will stand at Little Round Top where Colonel Joshua Chamberlain of the 20th Maine Regiment fought off Confederate Assaults, and see, also, the spot where the greatest speech in American History was made by our greatest President. You do not want to miss this exciting tour! $495 for 1 to 3 people.  Includes transportation from Philadelphia to Gettysburg and back.

Join us as we explore the Civil War, and visit the most